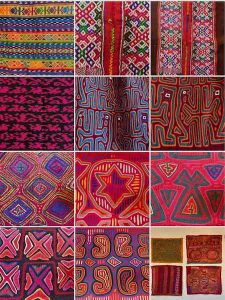 From the collection of Mickie McCormic: In 1972, McCormic set off for South America in a Volkswagen van with her husband and 3-year old son (who had his fourth birthday in the jungle of Ecuador). They made it as far as Peru, and she collected textiles all along the way, including woven pieces from Peru, ikat-dyed work with elaborate knotting from Ecuador, and molas from Panama.

Many of them are on display and for sale in November in the Pacific Textile Arts gallery, opening on First Friday, November 4th. There will also be pieces from the Pacific Textile Arts’ study collection, including Pre-Columbian works and a shirt that shows how molas were incorporated into clothing. Although many molas are made for tourists today, all of the ones on display were originally used as clothing.

Before the trip McCormic was a weaver, and after returning in mid-1973, she did a Master’s degree in Pre-Columbian Fabrics. On Saturday, November 19, she is giving a talk about a design mystery that she studied then, unraveling the imagery in the complex abstractions of Tiahuanaco tapestries.

Saturday November 19th program:
People will be getting together at 10:00, and her talk will start at 11:00.
Everyone is welcome — donations appreciated.
PTArts is at 450 Alger St.. Turn left at the end of E. Laurel St. in Fort Bragg and look for the quilt block on the house.